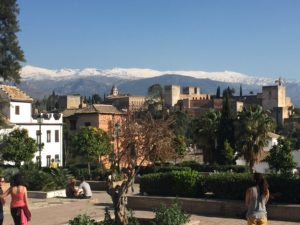 We just finished our 2nd day in Granada, which is in the heart of the Andalusia region in southern Spain and the region in Dosin closest to Northern Africa. The proximity to Northern Africa is seen when visiting Granada and The Alhambra, a Moorish palace and fortress originally built in the 9th century and completed in the 13th century. The Sultan surrendered control of The Alhambra to King Ferdinand and Queen Isabella in 1492, and it has been under Spanish control ever since and is the most visited tourist site in Spain. It is one of the most well-known representations of Islamic architecture in the world.

After touring the Alhambra, all students participated in a “City Challenge” in which they had to find ten key monuments/squares/altars and had to find the answers to important cultural and historical facts about the city.

After the city challenge, we had lunch in a classic Spanish plaza setting and lively pedestrian activity as it was Sunday afternoon. Then, we had Moroccan tea and an assortment of Moroccan sweets in a traditional Moroccan tea house.

As it was a gorgeous afternoon, we walked through the old, narrow cobblestone alleys and passed through a key market area with numerous shops selling wares of numerous types.

After the day, we were happy to get back to the hotel for dinner and sleep.   Hasta Pronto!